Japan's first major B2B trade fair since the lifting of the state of emergency.

The 12th Kansai Hotel & Restaurant Show has opened.
Together with concurrent exhibitions, the entire INTEX Osaka facility is being fully utilized!

Today marks the opening of the 12th Kansai Hotel & Restaurant Show, organized by the Japan Management Association as well as four other organizations, running from Wednesday, July 29 to Friday, July 31 at INTEX Osaka, along with five other exhibitions. A total of 460 companies at 830 booths are utilizing the entire complex at INTEX Osaka. These exhibitions are the first large-scale B2B trade fairs since Japan lifted its national state of emergency.

For a revival of the MICE industry starting from Osaka and a revival of economic activity, we as an official supporting organization will continue to assist the organizers throughout the event. Let's take a look at the exhibition’s first day:

15 representatives from the Osaka prefectural government, Osaka city government, and Osaka Chamber of Commerce and Industry, as well as those from economic and tourism organizations, are all supporters of the exhibition and attended the opening ceremony. From the Osaka Convention & Tourism Bureau, President Hiroshi Mizohata was also in attendance.

Masami Nakamura, chairman of the Japan Management Association, stated in his address that these exhibitions will contribute to economic recovery and the promotion of industry. Hiroshi Mizohata, president of the Osaka Convention & Tourism Bureau, a supporting organization for the exhibition, expressed in his congratulatory address, “By firstly holding Japan’s first major exhibition amid the coronavirus pandemic, we want to send a big, encouraging shout to those concerned about exhibitions and international meetings held across Japan.” Download the full speech below.

Afterwards, the attendees together cut the ceremonial tape, officially opening the exhibition. The venue was filled with thunderous applause, signifying high hopes for the resumption of the MICE industry and for the recovery of economic activity. 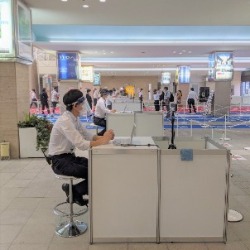 At 3:30 p.m. during a seminar on Infectious Disease Control Measures, the Osaka Convention & Tourism Bureau’s MICE Policy Director Yoshikazu Tanaka took the stage to explain the Bureau’s guidelines for MICE event organizers, drafted under the guidance of Osaka City University’s Dr. Tetsuo Kase of the Department of Public Health in the School of Medicine (and who is also the Osaka Convention & Tourism Bureau’s infectious disease control advisor.)

Mr. Tanaka, who spearheaded the drafting of the guidelines, elaborated on what will and will not change for the MICE events during the “with-corona” era, and opened a public discussion on what measures MICE event organizers should be implementing. The discussion was also broadcast online, allowing many people both in and out of the venue to listen in and express their interest in the topic. The discussion led to emphasizing that the most important infectious disease control measure is each and every person’s awareness, as well as not attending when ill and adamantly carrying out basic measures such as frequent hand washing.

Attendees were left with the conclusion that like medical care, the economy is an important part of protecting human lives. The MICE industry, an engine for economic recovery, while must be revived while carrying out infectious disease control measures.

This exhibition will be held until Friday, July 31 so we encourage those interested to attend and/or report on the event. As part of the event’s infectious disease control measures, please register in advance from the website below. (Japanese)